The allure of using a tai chi app to learn the form and reap the health benefits are great. They are inexpensive, accessible everywhere right on your phone, and have nice visuals and a way to interact with the teacher. However, there is little to no evidence that anyone who has used tai chi apps for learning has made any real progress.

A tai chi app organizes tai chi’s movement from the forms into easily digestible teaching segments, laid out in a series of videos and lessons. On average, tai chi apps include additional content explaining the purpose of the moves and fighting techniques.

I typically support any form or method, technologically or in person, to spread tai chi and increase the numbers of practitioners. The method has to accomplish two things though; it should both introduce more people to tai chi and give them tangible health, physical, and/or mental benefits. Even mediocre instruction would be acceptable.

In the case of most tai chi apps the art has been boiled down so far that it is difficult to get a clear picture of what tai chi is. Worse still, I fear that more students will be lost from not experiencing any success and getting the wrong idea about tai chi right out of the gate. It doesn’t have to be that way though. There might be a future for tai chi apps and currently we have one good option if an app is the only way a person can learn. I am just not sure we are there yet.

Let’s cover the current limitations of tai chi applications and introduce technology that now does the same thing in what I think is a better format. If you have used an app and achieved real results or if you are an app developer and have produced something that addresses the shortcomings I am about to share, please let me know in the comments. The more people who practice tai chi, the better off we all are. If your work contributes to this I would like to let readers know. However, at the time of writing, I have yet to meet a student who used an app who wasn’t frustrated when they saw what we were doing in class. And, apps I have explored fall short of their goals.

The current limitations of tai chi apps are largely technological and they just might not be the right format for transmitting knowledge. Even the best tai chi apps struggle to organize a coherent message about how the moves are linked together, how they are performed correctly, and what the purpose of tai chi is. These are additional shortcomings shared by all technology when compared to in-person training. And finally, the boiled-down, segmented nature of apps has led to some lofty promises about what the app can accomplish. Let’s start with the most egregious.

In an attempt to gain users I suspect, many tai chi apps have resorted to clickbait titles and promises of being able to learn tai chi in 10, 7, and even 5 minutes each day. These promises don’t even warrant further debate. When have you ever accomplished anything in life by focusing on it for 300 seconds each day? Yes, applications make things faster, more accessible, and easier.  But a 7 minute tai chi app that correctly teaches a martial art?

Know that there is no one who has learned tai chi in 7 minutes a day. Not even the masters. Yes, after learning a short form, it can be performed in just a few minutes. But the months it takes to learn the form make the daily average way higher.

2. Tai Chi Apps are Disassociated from the Community

People successfully learn tai chi on their own. Through online courses, which I will highlight at the end, they get step-by-step instructions and lace the form together. Typically in these circumstances they have access to the instructor to ask questions. The forms that are taught online are often the most common meaning you have a really good chance of finding someone to practice with. However, with tai chi apps you are not necessarily plugging into a community. It provides you exposure to tai chi and you can then go seek out practitioners of the same style. But that’s about it.

3. The Limitations of an App As a Teaching Format

Apps in general are successful at teaching small processes to a person who already has some experience. Recipes are a great example. Someone has cooked before and they are using the app to see a variation. They are also great for accessing data that has already been organized for you such as videos, podcasts, shopping, or metrics apps like the weather.

4. Difficulty Connecting the Individual Moves Taught in Segments Back to The Form

The organization of some apps are beautiful. This would almost be the biggest strength because an app gives you the ability to scroll from movement to movement and jump right in to the section you are working on.

However there two types of segments in tai chi. There are the moves themselves and there are the moves that connect the moves or transitions. You can see this in detail when examining how to learn the long form, but here’s a quick example. In many forms Roll Back is followed by White Crane Stands on One Leg. The individual moves are easy to see. But how do you get from one smoothly into the other?

If online teaching content is available on your phone, that’s great. But it should also be available on your computer. It is so hard to catch the nuances of a movement when a teacher is standing in front of you, let alone on a TV screen. The advantage of video is that you can be shown repetitions at different angles. See movements on a phone screen is just too tiny. I do use my phone out in the park to review a segment of my teacher doing the form if I need a reminder. However, I already know the form and I can also watch it on a full-size screen later.

6. Availability only on IOS or Android

Most apps these days are available on both Android and IOS but not all. Most app developers go one direction, typically Apple, then put the effort into the other platform once the kinks are worked out and once they see that they have an audience. With most people interested in free tai chi apps, the money isn’t there to continue the app’s development. Again, using a tai chi app doesn’t make a lot of sense when you have great teachers launching courses on platforms like Udemy which can be watched on any device.

7. Crashing of the Apps or Apps not Being Updated

Anyone who has been involved in developing an app knows that one of the biggest headaches is keeping the app updated so that it continues to function on future versions of IOS and Android systems. Add the low profit margin in from above and there is not a lot of motivation to keep an app going. This stinks if it is the only version of the form you know and your example is basically lost. Videos you can save or videos you have unexpired access to are a better bet.

Best Tai Chi App If This is Your Only Learning Option

Okay, so let’s say you can ONLY use an app and want to learn tai chi. I imagine this could be true of young people who only use a phone or someone who has a break midday without a computer near them. I am hopeful for the future of tai chi apps. If you want to go this route then the best tai chi app to date captures the teachings of Yang Jwing-Ming.

Dr. Yang is incredibly talented and has been teaching and publishing materials since the 1980s. What makes this app good is that he teaches Yang Style which is the most popular style so you have a good chance of meeting other practitioners. He also spends a lot of time explaining the moves and talking about the purpose of the moves. I think it is the best tai chi app primarily because he is such a prolific author and you can pair this app with so many of his materials. 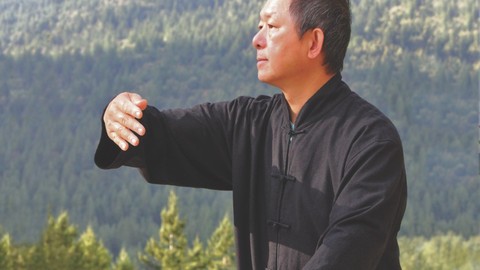 Here’s the thing though, he has published out the same content on Udemy, a teaching platform for online courses. So not only do you get his level of teaching on any device, without the shortcomings listed above, it only costs a few dollars. Technically Udemy has an app for your phone so is this a tai chi app? Theoretically yes, but with a whole ton of other advantages. Have a look at the introductory video where Dr. Yang Explains what’s included.

If Not Tai Chi Apps, Then How Do You Learn On Your Own?

I think online courses are organized so well and so expertly produced that apps for learning can’t really compete. They are so easy to use and so cheap, I can’t see the advantage of using a tai chi app even if there are future advancements.

Using online courses means that you can learn tai chi on your own and you can do tai chi as many times a day as fits your schedule. You still need to find the right style of tai chi for you based on your own fitness goals. In addition to Dr. Yang’s course linked above, I reviewed different tai chi online courses that are different styles and at different price points. Spend your time there and wait to see if a better tai chi app comes out in the future.

Tai Chi Basics is a participant in affiliate advertising programs like Amazon designed to provide a means for sites to earn advertising fees and cover expenses.

An aspect of studying tai chi that can be daunting at the beginning is understanding the many new Chinese words that describe our postures and movements. As a newbie, it can be overwhelming and most...

My start with tai chi was rocky at best. After several years in another martial art I was introduced to tai chi near my university and was totally absorbed. I liked the class and people a lot and was...

Get Notified When We Publish a New Essay

Once a month we send a newsletter listing all new essays that have been released. Sign up and Receive 2 Free Downloads!

Don't worry, we don't like spam either. We will only send useful content and you can unsubscribe at any time.